Statdocks can be a little confusing at first, but setting them up is pretty simple once you get familiar with the website editor.

There are two ways to create Statdocks. The Bot offers a very quick and easy way to create preset Statdocks and Statdocks with a little bit of customization. The Website Editor is more complex but offers much more flexibility and many more counter options. After you feel comfortable with the Bot, we highly recommend you try out the website!

You can watch the video to see a walk-through of how to create Statdocks with the Discord bot. The information after it will walk through the same process.

You can use the s?statdocks setup command followed by y to create a few preset Statdocks in a new category. This is a great place to start to get some stats in your server and see it all working! If you want to remove any of them, just delete the channel.

The s?statdocks create command will give you a menu of more preset Counters from which you can create specific preset Statdocks. Use the s?statdock create preset_name command, replacing preset_name with the Counter you want from the previous. This is case-sensitive!

Finally, you can create a Statdock with a custom name and one Counter with the s?statdocks create custom command. Running this without any text after it will give you a menu with more Counters and a number next to them. Take note of the number next to the Counter you want to insert. Using that number between {{ }}, put your custom text after the command.

Example: s?statdocks create custom There are {{19}} users
With 100 users, this will create a channel like There are 100 users.

The Website Editor unlocks the full power of Statdocks and all of its customization to you. Some Counters are only available through the Website Editor, and it is currently the only way to add multiple Counters to a Statdock.

After going to the Settings page of your server, you'll find "Statdocks" on the sidebar menu. On the Statdocks menu, you’ll be greeted with a screen similar to the screenshot below.

Click + Add to create a new Statdock. You'll see the menu below whenever you add or edit a Statdock. 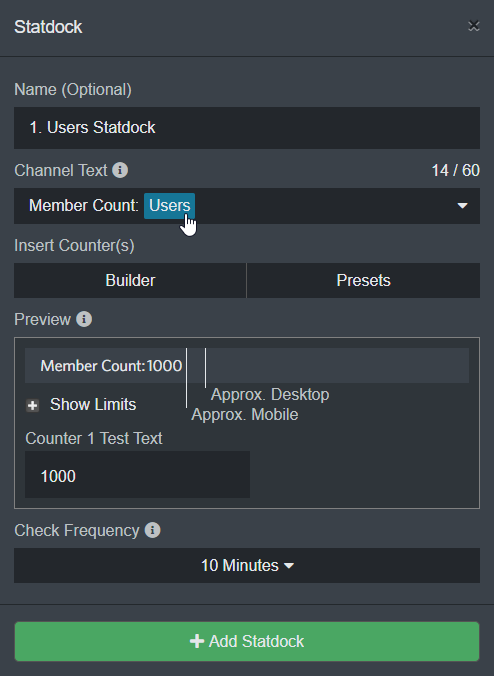 When you save a new Statdock, the bot will attempt to make the Discord channel.

If it fails, it will let you know what’s wrong. You will also have a chance to save the configuration so that you don't lose your hard work while you fix the problem.

If it succeeds, the bot will create the channel and you’ll be able to move it wherever you want in the Discord server. Be sure to mind the permissions and make sure Statbot has the Manage Channel, See Channel, and Connect permissions for each Statdock in order to update them.

When you save an existing Statdock, the bot will attempt to update it with your new settings.

Discord bots can only update channel names twice every 10 minutes because of Discord rate limits. The bot may not be able to update a channel immediately when you save it.

Statdocks can be turned On and Off, denoted by the Statuses "On" and "Off" respectively. Turning "Off" a Statdock will delete the Discord channel but keep the config in your settings. This allows to you remove a Statdock without needing to completely delete it. This can be useful for Countdown counters and others where you might want to re-use some settings from old Statdocks. Deleting a Statdock’s Discord channel will automatically deactivate the Statdock.

Each server can have up to 50 Statdock configurations. If you exceed this limit, you will need to delete some before creating more.

Each Statdock may have up to 4 Counters. Premium Counters are limited to update at most once every hour; however, the statdock update command may be used to update before the scheduled time if necessary.

Because of Discord rate limits, channels can only update twice every 10 minutes. The statdock update command cannot update any faster than this either. This is part of why 6 minutes is the lowest [Check Frequency] time available (5 minutes cannot be guaranteed because of latency).

Servers without the Statdocks+ upgrade will have their counters update on a minute offset between 0 minutes and the interval on the Statdock (e.g. 10 minutes, 1 hour, etc).